Experiments using the Crystal Barrel detector at ELSA are currently preparing for the third setup. The different setups will be described below.

All of these setups are centered around the Crystal Barrel detector. This detector had been used until 1996 at the LEAR (Low Energy Antiproton Ring) at CERN in the field of meson spectroscopy investigating antiproton nucleon interactions.

The detector itself originally consisted of 1380 CsI(Tl) crystals with excellent photon detection efficiencies. It was set up in a way that all crystals pointed towards the center, where the target is placed. The crystals are grouped in 26 rings (Δθ=6°), where the larger rings consist of 60 crystals (Δφ=6°), the six smallest rings contain 30 crystals (Δφ=12°). It covers angles from 12° to 168° with respect to the beam direction resulting in 97.8% coverage of the solid angle. 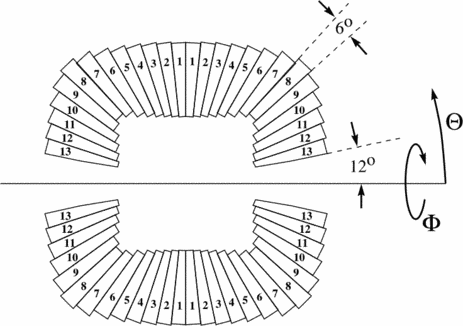 The crystals have excellent detection efficiencies for photons. When hit by a photon, the crystals of the Crystal Barrel calorimeter emit light that is proportional to the energy of the particle.  An electromagnetic shower is produced and spreads over several crystals. The light is collected at the end of the crystals by a wavelength shifter that adapts the emission wavelength of CsI(Tl) crystal to the most sensitive wavelength of the photodiode with which the crystals are read out. During the second beam period, the forward three rings were taken out.  The TAPS detector was installed as a forward detector wall. For the third beam time these forward crystals are arranged in a so-called forward plug, which is equipped - in addition to the crystals - with charged particle detectors and fast triggering capabilities (photomultiplier readout).

A fast cluster encoder (FACE) groups single crystals and thus finds clusters in the calorimeter on the basis of a cellular logic with predefined patterns. It generates a condition for the second level trigger containing information on the multiplicity in the Crystal Barrel.