Some 50 years ago, the baryons that had been known at the time - protons and neutrons - were considered elementary particles themselves. However, in the years to come, a spectrum of baryonic resonances was discovered. As in optics, the excitation spectra of atoms yield information on the structure of the atom, the excitation spectra of protons and neutrons allow to draw conclusions on what nucleons look like on the inside.

One of the problems one encounters when investigating the internal structure of nucleons is that there is no exact theory of the strong interaction describing the energy region in which hadrons form. At rather large and at very small energies, the strong interaction can be described perturbatively: For large momentum transfers Q2, the coupling constant is small so that the interaction can be treated perturbatively similar to the electromagnetic interaction. At small energies, where the coupling constant is large, chiral perturbation theory provides a tool to describe the interaction by treating the momentum and chiral symmetry breaking perturbatively. However, at intermediate energies where hadronic physics is to be established, αs is in the order of 1, so that now perturbative treatment is possible.

If we take the proton or neutron consisting of three of these constituent quarks, the method of baryon spectroscopy becomes obvious: We take any quark, lift it to an excited state, and observe the decay of the excited system. For the excitation, we use photons, so that it takes place in electromagnetic interaction rendering the experiment independent of the coupling to any incident hadronic channel. In the final state we observe a proton and any number of photons stemming from the decay of (neutral) mesons. These photons can be combined reversely to give these mesons. Investigating the angular characteristics of these final states allows us to draw conclusions on the properties of the intermediate state of nucleon or Δ resonances that we are interested in, γp -> N* (Δ*) -> pX (where X stands for any number of mesons/photons).

The spectrum of baryonic resonances has been investigated in different reactions, e. g. NN and πN. γN has yet been investigated by only few experiments to a lesser extent.  It is expected that resonances may occur here which have not been observed so far. The coverage with data over the full angular range and the whole resonance region is still incomplete, so that there is a great discovery potential in store for the Crystal Barrel experiment at ELSA. The experimental findings one can find gathered by the Particle Data Group agree quite well in the low mass region of the spectrum with what models predict. However, there are still discrepancies at larger masses: Experiments have not found as many resonances as predicted. 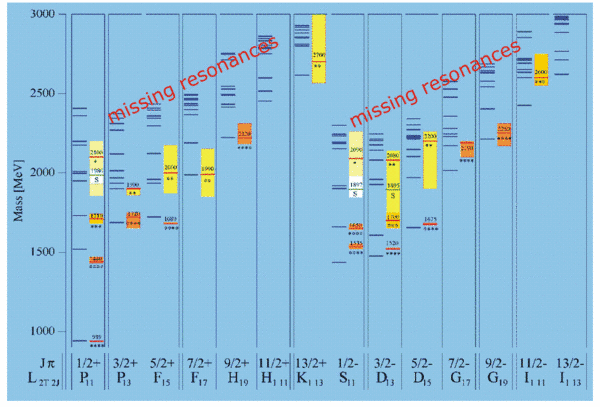 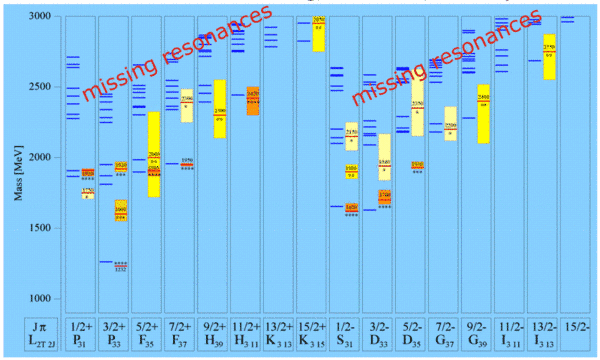 There are still some open issues in the spectrum, for which there have been various attempts of explanations:

In any case, the thorough investigation of a channel other than πN could provide us with more information on couplings and - depending on wether or not we find new states - thus find out more about the internal structure of nucleons.